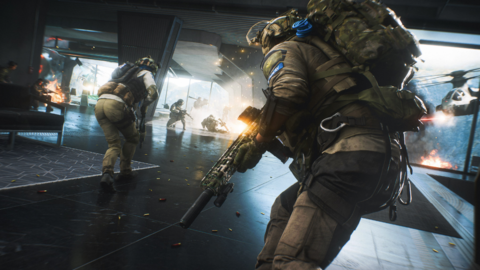 Battlefield developer DICE is “only focused on Battlefield 2042” and no other franchises, according to the studio’s new chief executive, Rebecka Coutaz. When asked if DICE’s Mirror’s Edge series is on the back burner right now, Coutaz replied GI.biz“Totally.”

DICE’s Mirror’s Edge series, a parkour action franchise, debuted in 2008. The sequel, Mirror’s Edge Catalyst, launched in 2016. DICE is also known for the Star Wars: Battlefront series, the latest of which version, Battlefront II, was released in 2017.

Battlefield 2042 launched in November 2021, but it struggled at launch. EA and DICE remain committed to the game and the series as a whole, and Coutaz said she hopes the team can be “really proud” of the game in time.

“That’s what they pursue and they have their heart and their passion for it. We want to be really, really proud of DICE. We want DICE to be the number one first-person shooter in Europe, and the “one of the powerhouses in the world. It’s a fabulous team. We’re going to do some magic together,” she said.

Regarding the immediate future of Battlefield 2042, Coutaz said DICE received “good feedback” on the recent launch of Season 1: Zero Hour.

“Players love our map and the content we’ve provided, so this is a win for us and it makes us feel better. The team is here to make Battlefield, and they’re passionate about Battlefield. We have many Battlefield veterans, so it’s important to us to improve Battlefield 2042 and the experience we can deliver to our players, and we owe them that,” she said.

Although Battlefield 2042 may not have met EA’s sales targets, the game finished 2021 as the fifth best-selling game of the year in the United States.