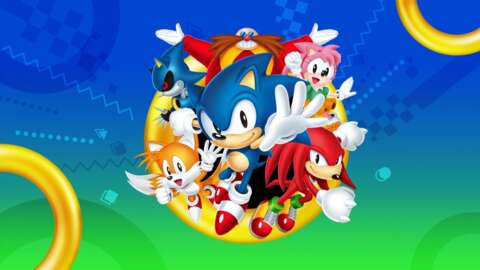 There’s no denying the appeal of classic Sonic – 16-bit Sonic games are some of the most memorable and influential platformers of the moment. No matter what happens with today’s Sonic, the old games remain as wonderful and exciting as ever; a kind of gaming comfort food that you can come back to for years. It’s no surprise, then, that Sega has re-released the classic Sonic games countless times in various compiled and standalone forms. Sonic Origins is the latest compilation of its kind, its main selling point being that the games have been completely rebuilt by many of the staff behind the beloved Sonic Mania. And while the games remain as delicious as ever, the overall package is a bit underwhelming.

Sonic Origins contains four (technically, five, since Sonic 3 and Sonic & Knuckles were sold separately) classic Sonic games from the 16-bit era: the original Sonic the Hedgehog, Sonic CD, Sonic 2, and the combined Sonic 3 & Knuckles. Rather than the emulation used by most re-releases, each of the games has been rebuilt in a new engine (the Retro Engine) to play almost exactly like their original releases, but with various quality of life improvements added. Sonic 1, for example, has a spin dash and fixes the infamous instant kill spike bug, while Sonic 2 adds a new level (the mythical Hidden Palace Zone), and Sonic 3 & Knuckles has reworked the sprite animation. for his cutscenes and the Super Sonic transformation, and so on. Additionally, characters that may not have been playable in the original releases are also made available, such as Tails in Sonic CD and Knuckles in Sonic 1. (Knuckles is still not in Sonic CD, presumably because his playstyle really doesn’t match the way the game’s levels play out.) Most of the original visuals and music remain intact, though some of the music from Sonic 3 (long theorized to involve Michael Jackson) has been changed, probably for legal reasons.

All games have a new “Anniversary Mode” which increases the viewing area to 16:9 (as opposed to the original 4:3 aspect ratio) and removes the life counter. You can still die, of course, but you’ll just respawn at the last checkpoint, making the threat of a Game Over imminent. The life counter is replaced by a coin counter. Coins can be collected in games from power-up monitors, getting lots of rings and clearing special stages. You can then spend those coins to unlock extras in the Sonic Origins Museum, or try again if you fail to get the Chaos Emerald in a special stage. This is a great feature for Sonic 1 and Sonic CD, where the opportunities to enter and complete a Special Stage are quite limited – less so for Sonic 2 and S3&K where there are more opportunities at the start and you can then cycle through the rest of the game. as Super Sonic after obtaining a full set of Emeralds.

If you prefer the old-fashioned way of dealing with lives and special stages, you can choose to play the games in classic mode instead, with the original 4:3 aspect ratio, while retaining all the various additions. and retouching. . Each game now features brand-new and exceptionally well-done animation sequences in its opening and ending, as well as an unlockable mirror mode (which reverses levels to run right-to-left), a Boss Rush, and a story mode that allows you to play all the games in sequence like a big Sonic adventure. Finally, the Mission Mode allows you to attempt various challenging tasks in modified classic stages to earn coins. There are some very fun and creative missions, but Sonic veterans will probably get through them very quickly – and the only way to get more “hard missions” is to shell out the cash for a day one DLC.

Not that you really need more missions to earn coins, as completing all of the basic missions will net you a treasure trove of coins with which you can easily unlock virtually all of the museum content, leaving you to sit on the rest of your winnings with virtually nothing to use them. The content of the museum is rather disappointing in general: there is a lot of concept art that has already been seen in other Sonic titles and collections, classic music remixes that have appeared in other games, such as Super Smash Bros. ., Sonic Generations, and even the recent Sonic Forces and animatics of the new intro and outro sequences. Looks like there could have been a lot more – where are all the weird Sonic ads and media we haven’t seen since Sonic Jam on the Saturn, for example?

It’s not just the extras that are a bit lacking either. Sonic Origins has some confusing glitches and omissions you wouldn’t expect in a retro compilation of this caliber. There’s no save state/reload functionality, or screen filters that can help smooth pixels into a nice CRT-like look. There’s an “anti-aliasing” screen option that makes the screen look like it’s been coated in petroleum jelly, but that’s it. The sound balance feels wonky at times too, with the base sound level a little muffled while some sound effects and footage are way too loud by comparison.

It’s also disappointing that playing with the traditional life system limits you to 4:3 aspect ratio. Likewise, oversights such as wallpaper options for 4:3 being locked behind paid DLC and requiring replay of a standalone Sonic CD in order to unlock all Time Attack stages, even when the game has been completed in Story mode, are a damper on the live.

Don’t get me wrong – the games remain excellent, and the painstaking dedication to recreating the intricate levels and gimmick interactions of the various Sonic titles is wonderful to behold. It warms the heart of that old Sonic fan to see the fake rotation of special stages and assorted stage objects much smoother, to see Super Sonic get new accurate animation frames instead of reusing a bunch of the ones belonging to Regular Sonic, and I finally have a great dedicated button in Sonic 3 and Knuckles so I can only transform when I really want to. And the long-lost Hidden Palace area, brought to life by the talented hands that created the fantastical levels in Sonic Mania, is like my childhood imagination made manifest. It’s a gorgeous scene filled with sleek curves and shiny gems, offering a delicious mix of enemies and unique gadgets that give it a personality of its own, as well as a very clever boss design at the end.

The long-lost Hidden Palace area brought to life by the talented hands that created Sonic Mania’s fantastical levels is like my childhood imagination made manifest.

But even recreations of the games themselves have some issues, with weird bugs that weren’t present in the originals. Partner-Tails in Sonic 2 has a bad habit of getting stuck in places and desperately trying to reach you for a very long time before its “return to Sonic” routine kicks in, leading to stages filled with background noise hateful of constant jumping and spin-dashing. Some of the transitions in Sonic 3 & Knuckles don’t work properly – I got stuck transitioning to Sandopolis 2 and was only able to continue after pressing the options button. And something about the death/respawn checkpoint system in S3&K seems really off: I had several instances where I died and didn’t respawn at the start of the stage rather than a checkpoint that I had hit, or respawned with an intact shield after a pit or crushing death, and even seeing a good portion of a stage’s checkpoints marked as hit before I even encountered them.

In terms of DLC, for an additional cost you can get a bunch of “hard” missions, additional wallpapers to use in classic mode, additional music, decorative extras and camera angles on the screens of menu. Given the relative dearth of extras to unlock, charging money for these features leaves a sour taste in my mouth. With so many coins that I don’t use, they seem perfect to include as unlocks that I can earn through normal play. Instead, it’s available for an additional fee to bolster an already unsatisfactory offering.

I know a lot of my problems with Sonic Origins sound like nitpicking, but I love these games and want to see them restored and presented with joy and reverence like the masterpieces they are – untainted by frivolous DLC which should be unlockable and dull presentation. Sonic Origins is close to being the definitive classic Sonic experience, but stumbles just short of the finish line.