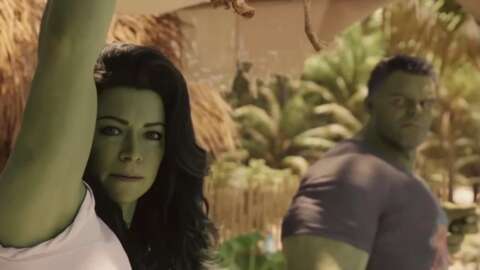 She-Hulk will be on Disney+ in a few weeks in its first live-action series starring Emmy-winning actress Tatiana Maslany as Jen Walters AKA She-Hulk. Maslany will be joined by MCU alumni Mark Ruffalo, again as Bruce Banner, Benedict Wong, and returning as Emil Blonksy, we have Tim Roth.

While the first trailer featured moments with Jen breaking the fourth wall, which the character did in John Byrne’s Sensational She-Hulk series. Showrunner Jessica Gao explained during the TCA press tour panel that there are a lot of those moments and that he wishes there had been more.

“It was very very difficult to find the balance because if I had what it took she would break the fourth wall every other sentence and I’m definitely on the ‘let’s go to 11’ side and everybody had to be kind enough to take me away from that a little bit more,” Gao explained. “But I will say that the show is very meta and self-aware, similar to how the [John] Byrne race [of comics] was very meta and self-aware and it’s present on the show but it’s not overwhelming.”

Director Kat Coiro added that She-Hulk was a pioneer in this field, and while fans made these comparisons, it was Jennifer who did it first. “I always like to also say that She-Hulk was breaking the fourth wall way before Deadpool, way before Fleabag. You know, in the comics, she was always very meta and she always kind of took control of her story and her story and I think that’s something that Jessica really captured in an incredible way on the show: the essence of that spirit.”

She-Hulk: Attorney at Law premieres on Disney+ on August 17.