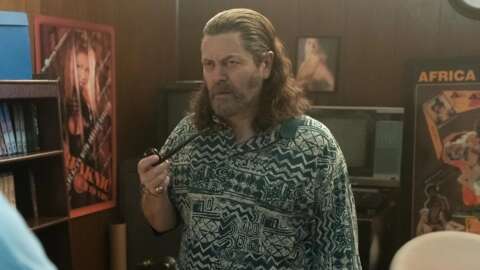 Nick Offerman will join the already massive cast of the upcoming Mission: Impossible sequel, Dead Reckoning. Offerman made a name for himself playing Ron Swanson on the NBC hit Parks and Rec and will star in the upcoming Amazon Prime series, A League of Their Own.

Writer/director Christopher McQuarrie took Twitter with the announcement saying the cast has grown and will talk more about it on the 200th episode of the Light the Fuse podcast. Joining Offerman will be Janet McTeer (Ozark) – both roles remain unknown.

McQuarrie also posted a preview of the next episode of the podcast, which will go live on August 3.

“Nick is literally drinking from the fire hose, getting his first full-throttle mission: Can’t see how the sausage is made,” McQuarrie said on the podcast.

“It’s really fun and fascinating. There’s a handful of really high caliber actors that I work with as well as the main character, and being able to throw the ball is amazing,” Offerman said. “Watching them handle the fire hose technique is fascinating because everyone brings a lot of momentum and panache and years of experience. And watching McQ and Tom do their thing, you can’t really describe it to the people. You have to be there. I’ve never seen anything like it. It’s like they’re painting an amazing mural and we’re all the paintings.

Mission: Impossible – Dead Reckoning Part One will hit theaters on July 14, 2023, ahead of Offerman’s debut in Part Two, which will arrive in 2024.