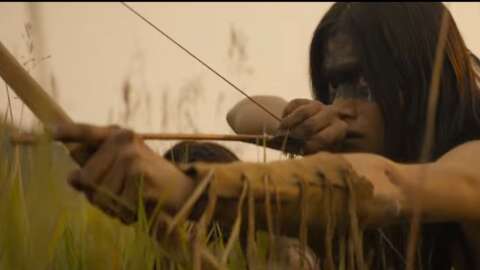 20th Century Studios has released a new trailer for the upcoming Prey movie, a sequel to the Predator movie continuing the long-running survival action franchise. The film comes exclusively to Hulu on August 5.

The new clip clocks in at just under 45 seconds, but makes it clear that the franchise’s fifth installment will be more in the style of the horror vibes of the 1987 original and now draws inspiration from Shane Black’s comedy in 2018 on tradition. A synopsis reads: “Set in the Comanche Nation 300 years ago, Prey is the story of a young woman, Naru, a fierce and highly skilled warrior. She was raised in the shadow of some of the most legendary hunters that roam the Grand Plains, so when danger threatens her camp, she sets out to protect her people. The prey she stalks, and ultimately confronts, turns out to be a highly evolved alien predator with a technically advanced arsenal, resulting in a vicious and terrifying confrontation between the two adversaries.

Indigenous actor Amber Midthunder (Legion) will play Naru. According to Disney, a character who wants to “prove her worth as a warrior [and] certainly gets her chance when she comes face-to-face with the most dangerous hunter of all time, the otherworldly predator.” From the synopsis, it looks like this film will also document the creature’s journey holder to Earth.

The Predator franchise started in 1987 with Arnold Schwarzenegger as its star. Prey will be the first Predator movie since 2018’s The Predator, directed by Black. Earlier in the canon, Moments of Extraction and Crucified, two prequel shorts were put together on the 2010 home release of Predators.