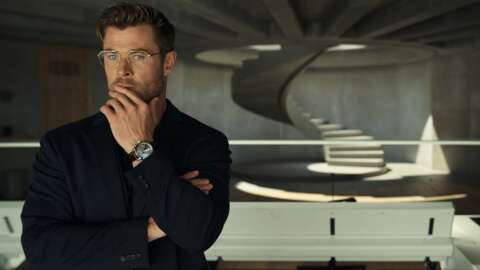 After some delays, Spiderhead is finally heading to Netflix. The adaptation of George Saunders’ short story Escape From Spiderhead was originally published by The New Yorker in 2010. It tells the story of prisoners seeking to reduce their sentence as part of an experiment with mind-altering drugs.

The film stars Chris Hemsworth as director Steve Abnesti, with Miles Teller and Jurnee Smollett as prisoners Jeff and Rachel. They are joined by Tess Haubrich, BeBe Bettencourt and Mark Paguio. Netflix has released the trailer which shows Hemsworth pulling an American accent and showing how drugs affect different prisoners.

Principal photography began in early November 2020 in Hemsworth’s native Australia, following an investment of A$21.58 million from the Australian Government, shared with the production of the Netflix thriller series Pieces of Her, for boosting the national economy during the COVID-19 pandemic.

Directed by Joseph Kosinski, who is set to have a great summer with Top Gun: Maverick hitting theaters later this month. Originally slated to release in the last quarter of 2021, Spiderhead is heading to Netflix on June 17th.