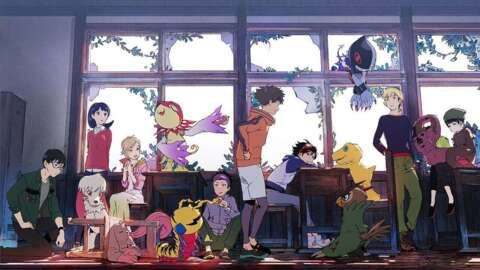 After encountering numerous delays and seeing a change of developers in development, Digimon Survive is ultimately come out this year. The upcoming RPG tells its story in visual novel-like chapters, as combat unfolds in turn-based strategy battles.

As Summer Game Fest and all the Not-E3 summer events approach, we may learn even more about the new game from developer Hyde and publisher Bandai Namco Entertainment. But, for now, that’s all we know about Digimon Survive.

Digimon Survive has two release dates. The game will initially launch in Japan on July 28. It will then be released in the rest of the world on July 29.

Digimon Survive begins with a group of students on spring break visiting a temple in order to learn more about the legends surrounding the mysterious local gods. The group is suddenly transported to another world where they encounter a Koromon, who aids lost humans by transforming into Agumon when attacked by other Digimon. Each of the students decides to work together in order to find the way back home.

In Digimon Survive, you can team up with and train 113 different Digimon. While you can totally fight anything you come up against, Digimon Survive also lets you talk with your enemies – listening to your opponents and answering their questions in a way they find satisfying can also lead to victory, and sometimes result in a potential enemy becoming another ally.

Between fights, the game plays out like a visual novel, giving the characters time to talk to each other and make decisions about what to do next. Digimon Survive will span 12 chapters, with the story branching off in three possible directions depending on whether you choose a Morality, Harmony, or Rage path. Reaching the conclusion of any of these three routes reveals a possible fourth secret route that you can attempt in a later game. According to producer Kazumasa Habu, each route will take around 40 hours.

Digimon Survive will launch on Switch and PS4 in Japan on July 28. The game will then release on Switch, PS4, Xbox One, and PC worldwide on July 29.

Official PC system specs for Digimon Survive have yet to be released.

Digimon Survive is a single-player game and will not feature any online or offline multiplayer component.

No DLC or microtransaction has been confirmed for Digimon Survive. It seems unlikely that we’ll get the former – Digimon games rarely get post-launch expansions or DLC – but cosmetic-centric microtransactions seem plausible.

Digimon Survive is available for pre-order on A , best buyand GameStop.