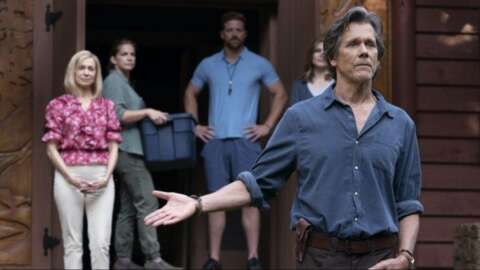 Peacock unveiled They/Them, a new horror film from Blumhouse starring Kevin Bacon. The film, a story of queer empowerment set in a gay conversion camp, will debut on the streaming service on August 5 according to The Hollywood Reporter.

The film’s title, pronounced “they-slash-them”, is a tongue-in-cheek reference to the film being an “LGBTQIA+ slasher”. An official synopsis for the film reads: “As camp methods become increasingly psychologically disturbing, campers must work together to protect themselves. When an unidentified ax murderer begins claiming casualties, things become even more dangerous.”

As of this writing, no trailers or clips have been released. A partial cast has been revealed in a production encore – showing Kevin Bacon as camp director Owen Whistler, Carrie Preston as his wife Cora and Anna Chlumsky as the administrator. Set over a week-long session at camp, the film focuses on the various campers, led by trans and non-binary Jordan (Theo Germaine), as they experience psychological and emotional torment from the camp’s programming. .

“I wanted to make a movie that celebrates homosexuality, with characters I never saw when I was young,” Logan said. “When people walk away from the film, I hope they remember the incredible love these kids have for each other and how that love should be protected and celebrated.”